It`s one of the most recognizable vehicles in the entire world. These monsters can go anywhere: mountain paths, deep forest, the high desert, DANG… even underwater. ANYWHERE!

Our story begins at about the end of the war. The big one. The Willys-Overland Company knows the worldwide conflict won`t last much longer and as a result they won`t be selling as many Jeeps as they did. 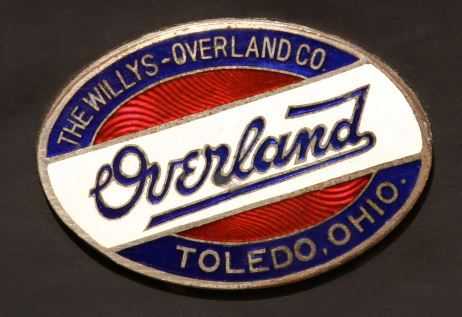 Now, this is a problem, because what all the company is equipped to make at this point is Jeeps. So they get to work adapting their MB war machines into something a little more accessible for the “civilized market”.

This new civilian Jeep, or CJ, would have special modifications to help the transition from the battlefield to the cornfield, the first of which was a tailgate, so you could put stuff in the back more easily.

The headlights were bigger and they weren't recessed into the grille like the old MB. The transmission was different, too. But other than these changes, the CJ was the same workhorse as the MB or GIs were driving in the war time.

Willys-Overland started selling this CJ2A in 1945. 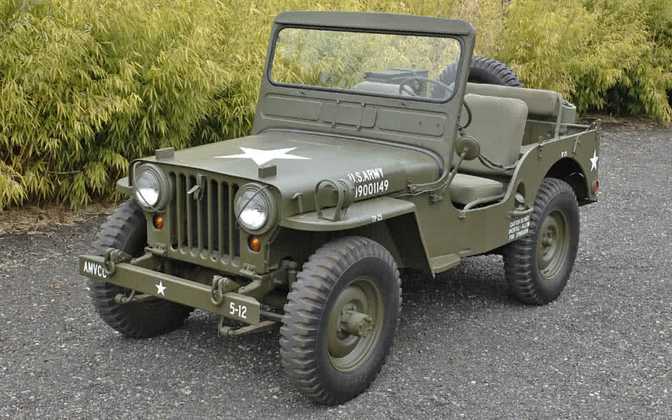 And naturally, people loved it, right? No, not really. They realized that even though they were marketing the CJ2A as a rugged utilitarian work vehicle, people still wanted to be comfortable. 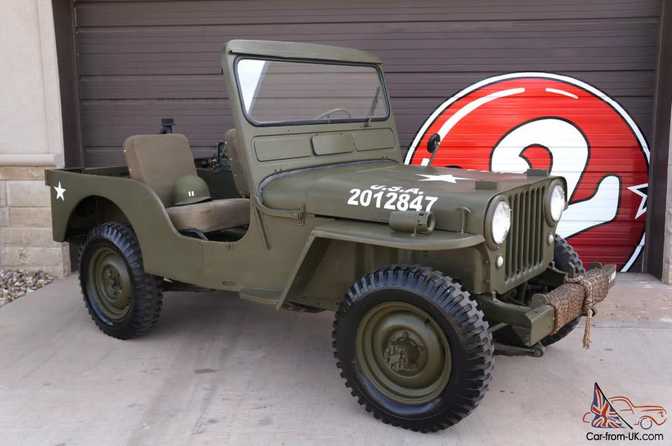 So, in 1949, they rolled out the CJ3A which had better seats, more legroom, and a host of other creature comforts for the average civilian driver.

Unfortunately, this move didn't stimulate sales as they had hoped, and the financial situation of Willys-Overland turned dire.

There was Henry J. Kaiser.

Henry was a shipbuilding industrialist, an early founder of Kaiser Permanente hospitals. Henry also wanted to start a car company, but he knew he was too small to compete with big companies like Ford and Chevy, so he offered to buy Willys-Overland and continue Jeep production under the Willys nameplate.

Before they could release an all-new model, they had one last refreshment of the CJ3 up their sleeve. The new CJ3B was a little more comfy, but this time around more powerful as well. 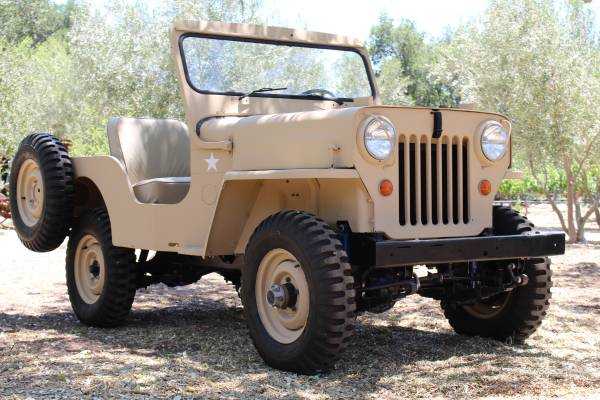 The new hurricane engine made a whopping 74 horsepower and needed a bigger hood to fit it in the car, and thus the Jeep started bulking up.

The first Jeep designed and produced under Kaiser`s ownership was the now iconic CJ5. 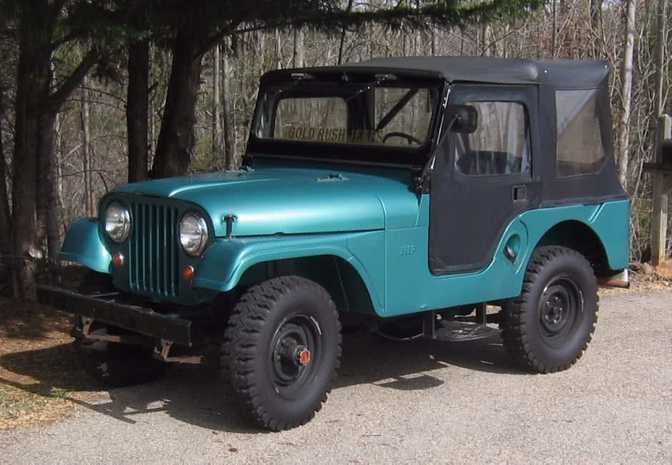 Introduced in 1955, the CJ5 boasted a new focus on universal utilitarianism. If you wanted a car that could handle anything you wanted between work and play, the CJ5 was the right car for you. Altogether, the CJ5 was very appealing to the civilian market because for the first time, it was designed for them. This was the beginning of Jeep culture as we know it. 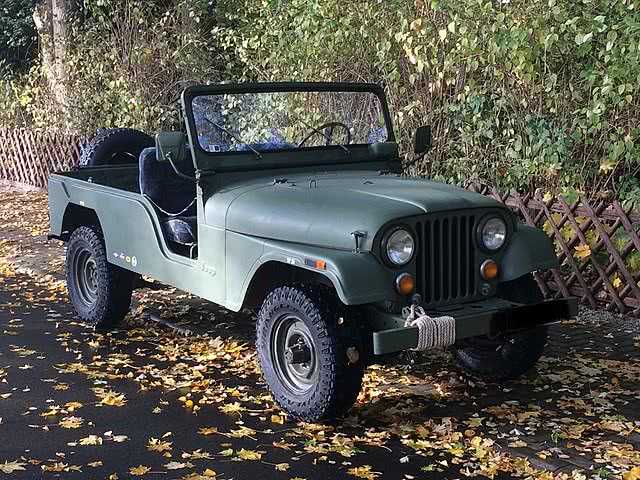 Alongside the CJ5 was the CJ6, and it wasn't nearly as popular as the CJ5 here in the States. Even though CJ5 and 6 sales were good, Kaiser Jeep still found itself on the fringes of the car industry.

Thinking forward as ever, Kaiser knew they needed a more mainstream foothold to survive, so they got in touch with the American Motor Company who was looking for a more utilitarian platform to round out their more performance-oriented lineup. 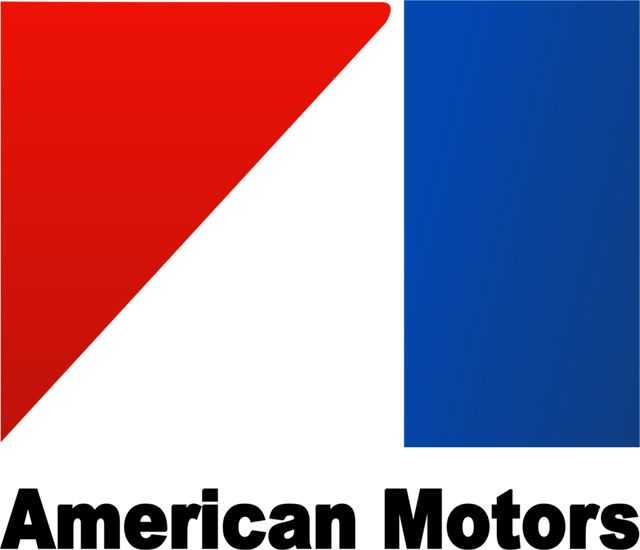 Jeep was already using some AMC engines by the mid-60's, so to merge two companies wasn't too far-fetched.

So, in 1970 Kaiser sold the Jeep brand to AMC. The first order of business was to convert all of Jeeps models to AMC power. The CJ was now available with two AMC inline-six engines and a 304 cubic inch V8. After the engine conversion was complete, AMC ordered a new design to put on the market by the bicentennial in 1976.

This new Jeep would be 10 inches longer, much more comfortable, and equipped with a sweet-sounding Quadra-trac four-wheel-drive system. The CJ7 was an immediate sales hit as soon as it debuted. Throughout its life, the CJ7 was available in many different trim levels, all with badass names. 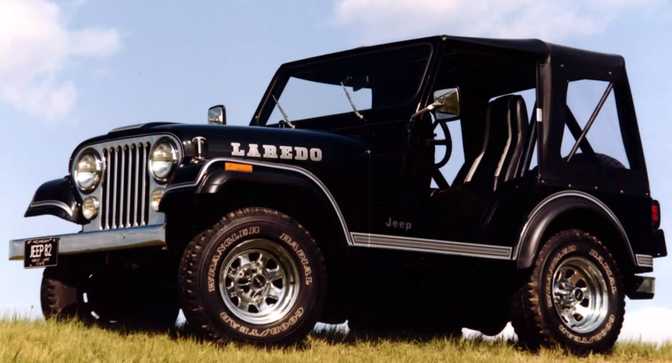 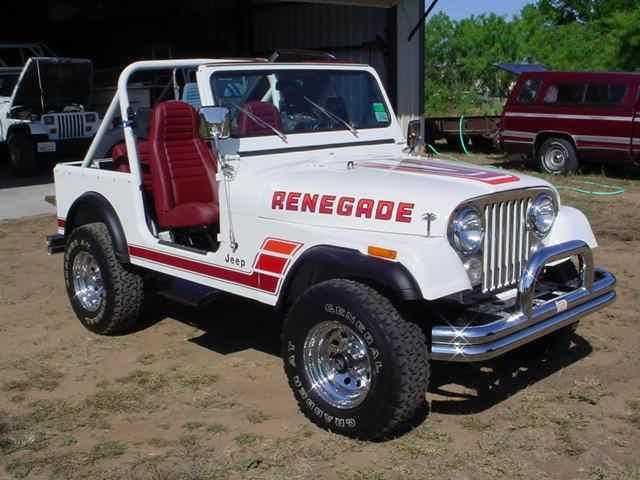 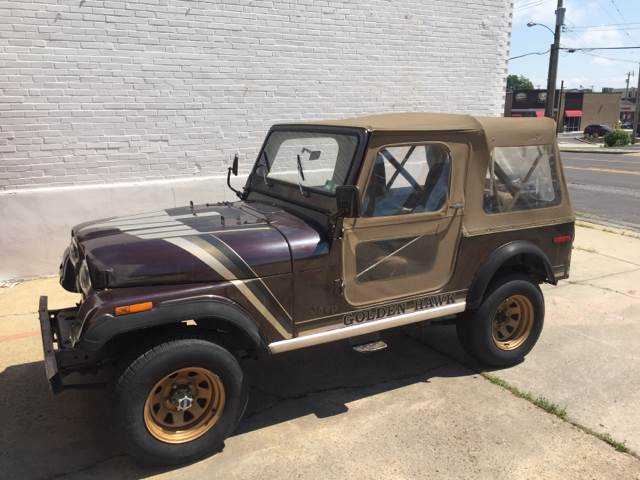 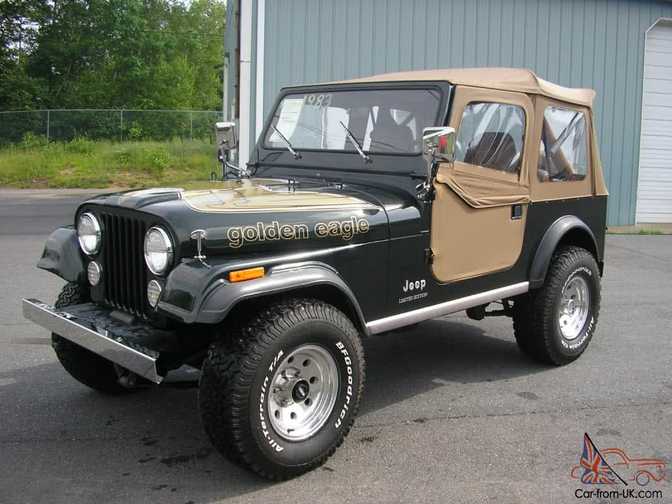 But, the top of the line CJ7 was the Jamboree. 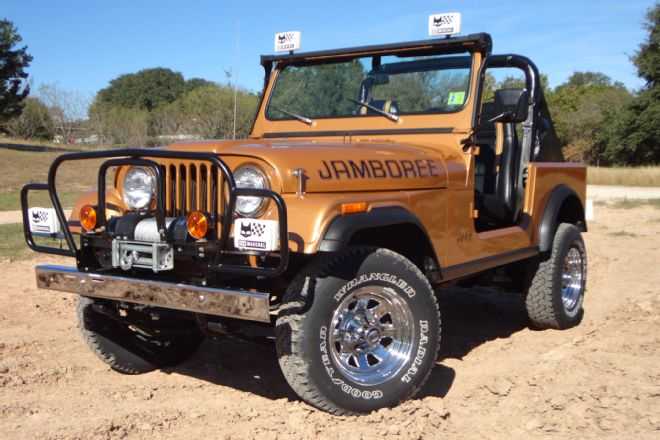 It was packed with special features and released to commemorate the 30th anniversary of the most famous Jeep event at the time, the Georgetown Jeepers Jamboree.

At around the same time as the Jamboree`s release, Jeep also dropped a long wheelbase truck version of the CJ7, called the CJ8 Scrambler. 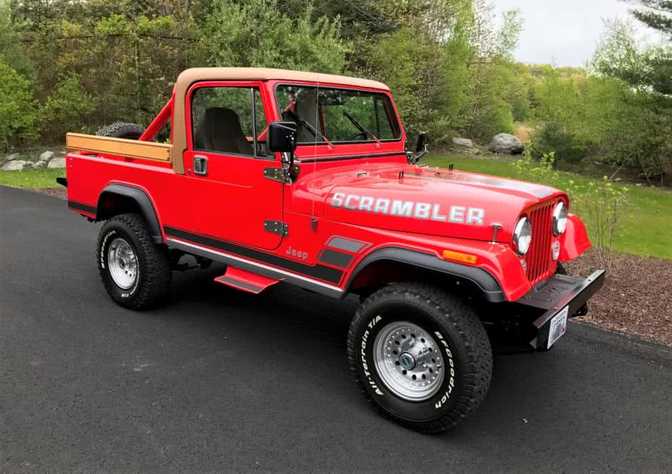 Like the CJ7 the Scrambler had a removable roof, but unlike the CJ7 it also had a short bed. Less than 28,000 scramblers were sold in its 5 year lifespan. not only was 1986 the last year for the Scrambler, but the CJ7 as well.

The 41-year run from the CJ2A to the CJ7 had concluded and with it, AMC's ownership of the Jeep brand. As was the tradition at this point, the Jeep name would be handed off from one struggling company to a new home, now at Chrysler.

Development of the new model began before the handoff, but the first new Jeep was the YJ, or, as it was officially known, the Wrangler. 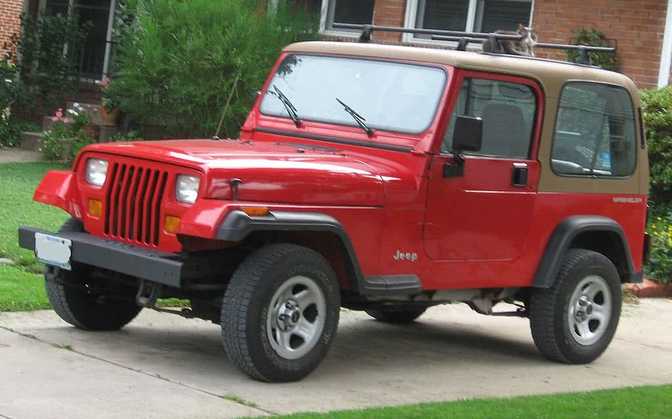 It was a completely new design, independent from the CJ line. The circular headlights were gone, now they were square! And that wouldn't be the only departure from the old CJ days. The YJ Wrangler was designed to be even more comfortable on the road.

With the release of the YJ, Jeep mania was in full swing. It had been years since the brand was perceived as a quirky classics cult, and had fully immersed itself in the mainstream.

The first time the characters of Jurassic Park see a real-life dinosaur, it`s from the back of the iconic red and gray 1992 YJ Wrangler Sahara.

What about the difference between all the different Wrangler trim level, you might say? The Wrangler S is the base model. Above that is the Laredo with its chrome grille and removable hardtop. Then, there's the Islander with special color options like Pacific Blue and Malibu Yellow. Above that is the Sport, which had a more powerful inline-six. Then the Renegade replaced the Laredo and was basically the big dog option for the YJ. 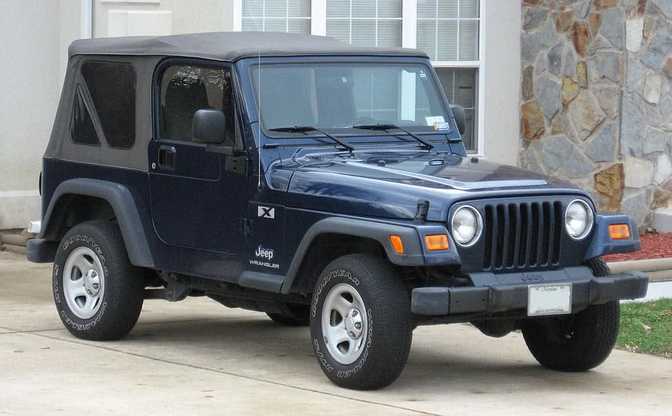 Then, in 1996, Jeep replaced the YJ with the TJ, whose styling cues were a bit of a throwback to the CJ. The round headlights were back, but the TJ entered the modern age of suspension with the inclusion of coil springs borrowed from the Cherokee. 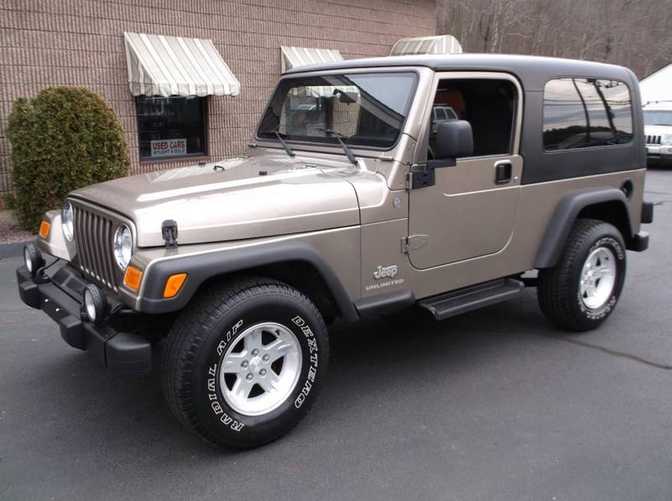 Eight years after the TJ's debut, the Wrangler Unlimited followed. This was another long wheelbase Jeep, ten inches longer than the regular TJ. 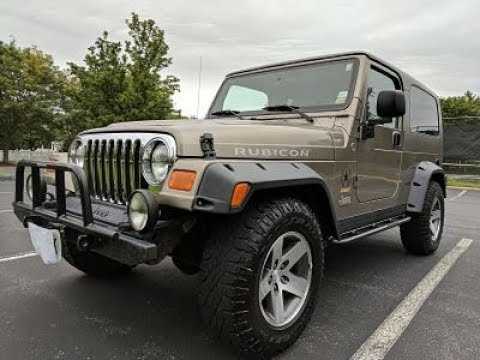 The biggest leap the TJ made was the introduction of the Wrangler Rubicon. It had super strong Dana 44 axles, 31 inch off-road tires, and diamond plate rock rails, so you didn't scratch up your paint out on the trails.

It took five years to develop the TJ's replacement, with the new Wrangler dropping in 2006.

The new JK model was no joke. It had a completely new body and chassis as well as tons of computer-aided stuff to help off-road.

Possibly the biggest change to the Wrangler lineup was the reintroduction of the Wrangler Unlimited. This time, with four doors!

Now, Jeep fans will argue whether or not this is a real Jeep, but the fact remains, that about 75% of all JK`s sales were the 4-door version. Early JK's came up with a 3.8 liter V6, which was stupid heavy and underpowered, making only 202 horsepower.

When paired with a four-speed automatic, this is kind a sh*t! But, luckily in 2013, Jeep upgraded the engine to the smaller 3.6 liter Pentastar V6 that put out a monstrous-by-comparison 265 horsepowers. Chrysler also produced a diesel version, but will never see it in the States, because the engine did not meet emission standards.

After the 2008 economic crisis, Chrysler was in dire need of help. Fiat came along and bought a 20% stake in Chrysler. Then, in 2014, Fiat sealed the deal and bought full control, with big plans for Jeep in mind. 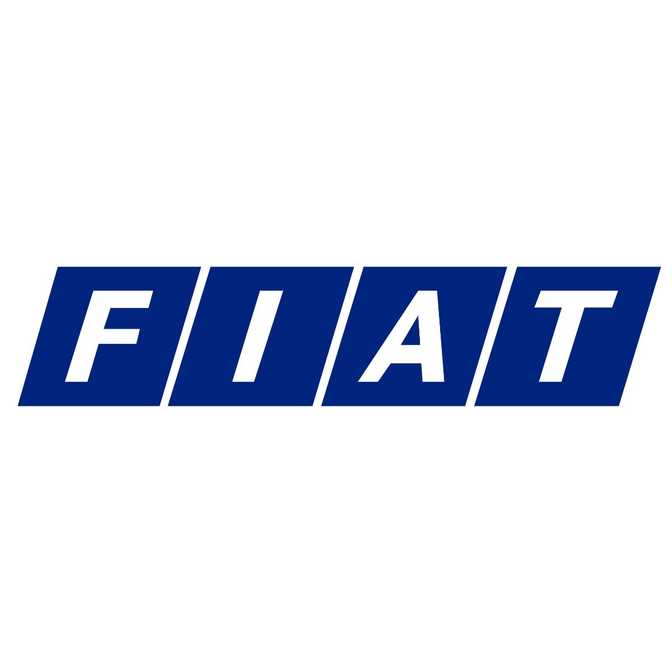 Jeep had always been an American-centric brand, but Fiat was thinking big picture, wanting to globalize the legendary workhorse once and for all. Today, Jeep is by far the most important brand in the Chrysler lineup, selling more and more Jeeps every day. 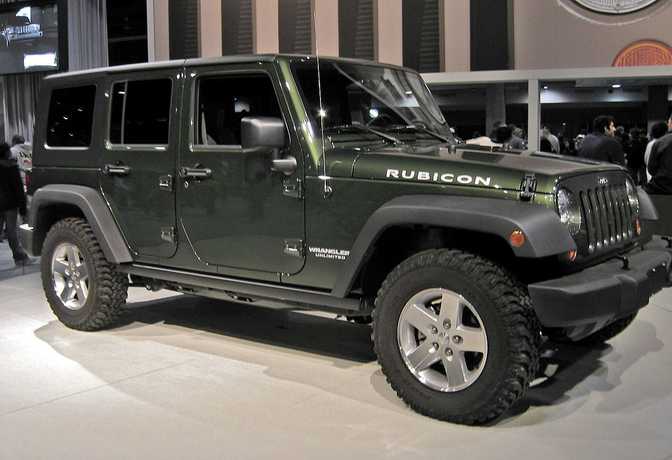 The JL is the latest Wrangler, continuing the jeep line since its wartime introduction in 1941. And, yeah, it's a lot more comfortable than its grandpappy, but it's still ready to go anywhere. Like the Willys-Overland would`ve wanted.