We do not know how it happened, but the idea that the strut and the shock absorber are synonymous is stuck in the heads of many motorists. It is known that the erroneous opinion is often generated by sellers of specialty stores. As well as various automotive forums, where the car "experts" say: " strut and shock absorber - the same thing." We can assure you - this is not the case, however, now you will understand everything yourself.

The first cars with a spring suspension had an unpleasant property: when overcoming irregularities, their bodies swayed a lot. Initially, this problem was partially solved by itself, since in the multi-leaf springs there was observed the effect of intersheet friction, which contributed to damping body oscillations. But this was not enough.

Therefore, the next step was the addition of a separate damping element to the suspension. One of the first such devices was dry friction shock absorbers with friction discs, developed at the beginning of the last century.

In the 1950s, telescopic-type piston oil dampers began to be used, based on the principle of fluid friction. Their device, borrowed from the design of aircraft chassis, is used in the suspension of cars today. 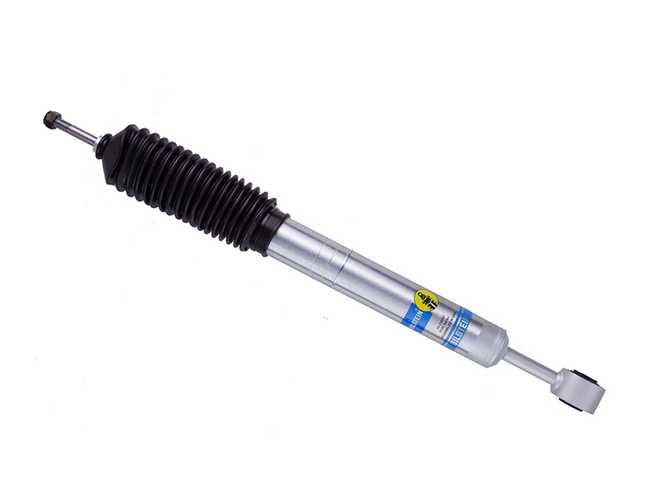 The shock absorber is an oil pump (in simple terms). It`s a just hydraulic fluid under pressure that flows in small amount through the holes. Due to the fact that these holes have a small diameter, the oil cannot flow quickly. In this regard, the spring and suspension is transmitted slow motion. The shock absorber increases its resistance with increasing suspension speed. As a result of this relationship, the following results are minimized: body jumps on the bumps, lateral buildup during maneuvering, as well as "nose diving" of the car during acceleration or braking. And all the kinetic energy that the shock absorber accumulates is converted into heat and is simply removed outside.

Strut - power element of the automotive suspension, representing the whole node of connecting the wheels and the body. In the strut, the support is usually combined with a damper (the functional part of the shock absorber) and a spring.

The main task of the strut is to maintain the weight of the car, maintain the desired orientation of the wheels relative to the body, and transfer to the body the traction force of tires with the road surface. Due to its robust body and reinforced stem, the stand is capable of accepting significant lateral loads.

Difference between shock absorber and strut 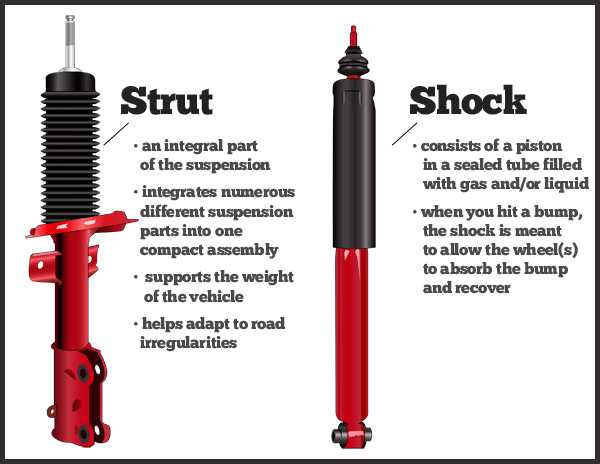 Strut and shock absorber have a different way of attachment. So, the strut replaces the upper ball and rotator. Therefore, it is firmly fixed at the bottom, but at the top - in the swivel device. It is noteworthy that the rack is equipped with a large diameter rod.

If we talk about shock absorbers, then they are mounted through silent blocks without a swivel device. And unlike the strut, the shock absorber is equipped with a small diameter rod.

In addition, the strut and shock absorber receive various effects of loads. Thus, the strut is subjected to multidirectional loads, but the shock absorbers receive an impact along its axis.

It is noteworthy that the shock absorber may well act as part of strut (but not in reverse).

The strut can take large versatile loads, and the shock absorber dampens axial vibrations. Thanks to its reinforced elements and the ability to perceive versatile loads, the strut gives the car greater reliability than the shock absorber. However, if the work fails, the control of the car is lost altogether, which is fraught with serious consequences. If a shock absorber malfunctions, the load on the suspension elements increases, but you can continue to move, often it will only give some inconvenience while driving, but it is better not to delay and look into the car service center.

By the way, such a malfunction is felt immediately. Since significantly reduced the effectiveness of the steering. In addition, when it`s no doubt the failure of a shock absorber, the car does not “properly" keep contact with the roadway, and also loses stability while driving.

But if the strut failed, then it is impossible to continue driving.

If you formulate the main differences of the rack from the shock absorber in a special list, it may look as follows:

• the shock absorber may well act as part of the strut, not the other way around, since the strut, in fact, already plays the role of a shock absorber, additionally “hung” with support springs and steering gear;

• unlike the shock absorber, the strut has a reinforced body and stem;

• the strut usually cost much more than shock absorber;

• while the strut is subjected to serious lateral loads, the shock absorber only damps vibrations;

• in comparison with the simple shock absorber, the strut gives to the car greater reliability;

• while a defective shock absorber gives the driver an inconvenience while driving, a failed strut is incompatible with driving.

And advice for the future: if suddenly in a specialized store or in the service you are assured that the strut and shock absorber are synonyms, think about whether it is worth trusting your car to such “professionals”.