There are billions of types of suspensions. We're barely gonna scratch the surface here and touch on the basics and a few of the most common car suspension types. When “They” invented the car it was awesome. At the same time, people understood how important is suspension on a car?

The people back in the day were smoking cigars and patting each other on the back eating some cold cuts and congratulating each others like : “This will revolutionize travel, the piston engine will get us places so fast”. But then, they realized all the power generated by an engine’s uselessness if the driver can't control the car. And almost as soon as the four-stroke internal combustion engine was mastered, engineers went on working on perfecting the suspension.

Horse-drawn carriages had suspensions, but they only went so fast. Hit those same bumps in the road at a greater speed, it's gonna get a loud bouncier. Let think about automotive suspension concept in general.

The job of a car suspension is:

If all roads were perfectly flat with no irregularities or bumps or waves or anything, suspension wouldn't be as necessary, but even fresh laid pavement has some imperfections.

Newton's Law of Motion says forces have both magnitude and direction. A bump in the road causes the wheel to move up and down, perpendicular to the road surface, direction. The magnitude depends on whether the wheel is striking a giant bump or a tiny speck.

The wheel experiences a vertical acceleration as it passes over an imperfection, and that means the wheel goes up. Without an intervening structure, the vehicles vertical energy is transferred to the car's frame, which moves the same direction, up. The wheels can lose contact with the road completely and then because of gravity the wheels would slam back down into the road surface, and that is BOUNCE.

You need a suspension system that absorbs the energy of the vertically accelerated wheel, allowing the frame and body to ride undisturbed while the wheels follow bumps in the road, and that's all part of vehicle dynamics - the study of the forces at work on a moving car.

Auto engineers come at this from two perspectives: ride - cars ability to smooth out a bumpy road and handling - cars ability safe accelerate, brake and corner. And those break down into these principles, road isolation - the vehicles’ ability to absorb or isolate road shock from the passenger compartment, cornering - the ability of a vehicle to travel a curved path, and road holding - the degree to which a car maintains contact with the road service and various types of directional changes and in a straight line.

Principle of a car movement

For example, weight of a car will shift from the rear tires to the front tires during braking because the nose of the car dips toward the road. This type of motion is known as dive. The opposite effect – squat, occurs during acceleration, which shifts the weight of the car from the front tires to the back. These are the challenges that the suspension system has to handle.

As we said previously, there are billions of suspension varieties and a car can, and usually does, have a different type of suspension on the front and back, and in those you can either have a dependent system, where a rigid axle finds the wheels, or an independent system where the wheels are permitted to move independently, but the three fundamental components of any suspension are springs, dampers, and anti sway bars.

But wait, you`ve been told that there is some kind of shock absorbers and coil springs under a body only, and you’re right 50/50. Because these things are actually just used along with shock absorbers OR struts to give a moving automobile additional stability.

Sway bars is a metal rod that spans the entire axle and effectively joins each side of the suspension together. 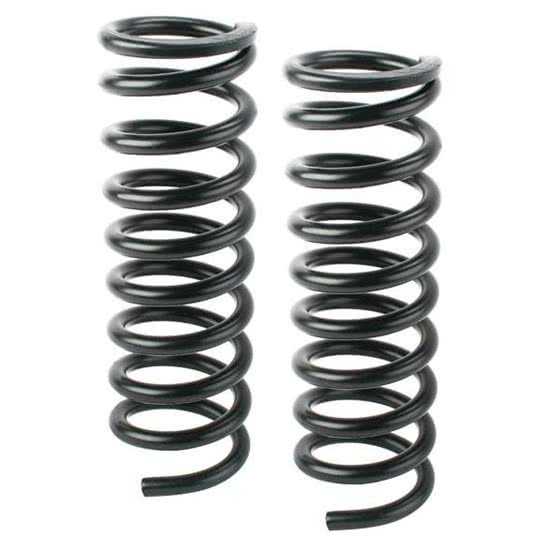 Let's get back to talking about one of the three fundamental components of suspensions. Now there's a couple of types of spring suspension that can be used there: leaf springs - several layers of metal bound together to act as a single unit, these are usually used on a lot of trucks. They haven't been on a ton US cars since `85.

There's torsion bars - one end of a bar is anchored to the vehicle frame and the other end is attached to wishbone. The wishbone acts like a lever that moves perpendicular to the torsion bar. When the wheel hits a bump, vertical motions are transferred to the wishbone, and then, through the levering action, to the torsion bar. The torsion bar then twists along its axis to provide the spring force. These are more common on European cars. 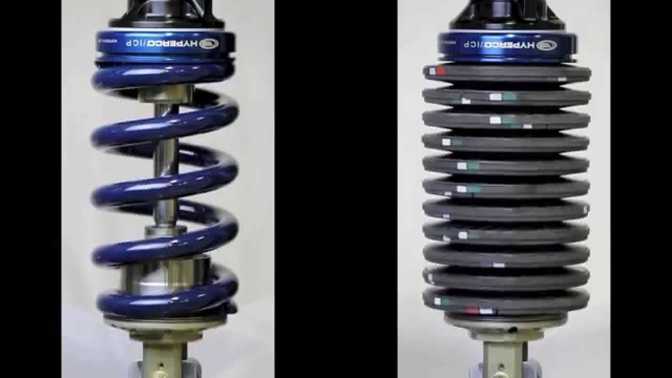 There's coil springs - basically a heavy-duty torsion bar coiled around on axis. These are the most common. Anything above the springs and supported by`em on the vehicle is sprung mass. Anything below the spring between the springs in the road, like the wheels, for example is unsprung mass. Spring stiffness affects how the sprung mass responds while the car is being driven.

Loosely sprung cars, such as luxury cars, swallow bumps for a smooth ride, but they're prone to dive and squat during braking and acceleration, it can have body sway, or roll during cornering. Tightly sprung cars, like sports cars, are less forgiving on bumpy roads, but they minimize body motion so they can be driven aggressively, even around corners. 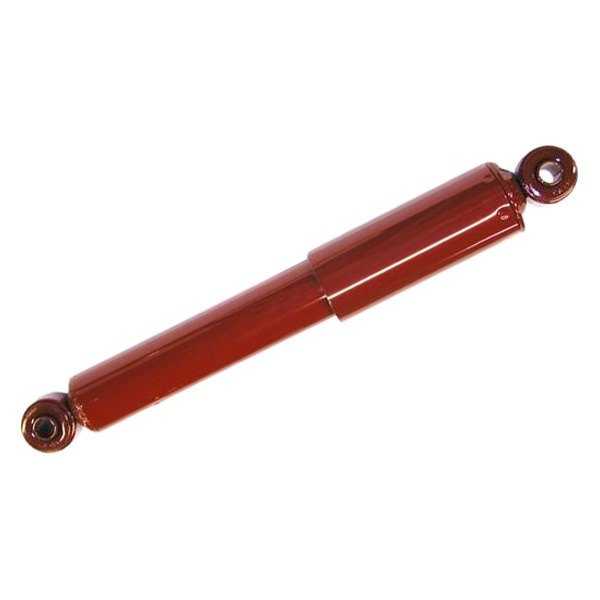 But you can't use just springs.

Springs absorb energy, but they stink when it comes to dissipating it, that's why you need dampers. One common dampening structure is a shock absorbers. They slow down and reduce the magnitude of vibratory motion by turning the kinetic energy of suspension movement into heat energy that can be dissipated through hydraulic fluid.

A shock absorber`s upper mount connects to the frame and the lower mount connects to the axle. In a twin tube design the upper mount is connected to a piston rod which is connected to a piston it sits in a tube filled with hydraulic fluid. The inner tube`s known as the pressure tube, the attitude is known as the reserve tube. The reserved tube stores excess hydraulic fluid.

OUR EXPERT TIP. When the wheel hits a bump in the road and causes the spring to coil and uncoil, energy of the spring is transferred to the shock absorber through the upper mount, down through the piston rod, and into the piston. Orifices perforate the piston and allow it to leak through as the piston moves up and down in the pressure tube. Because these orifices are relatively tiny, only a small amount of fluid, under great pressure, passes through. This slows down the piston, which in turn, slows down the spring.

The faster the suspension moves, the more resistance the shock absorber provides, so they can adjust to road conditions and control all the unwanted motion that can occur in a moving vehicle, including bounce, sway, brake dive and accelerating squat. 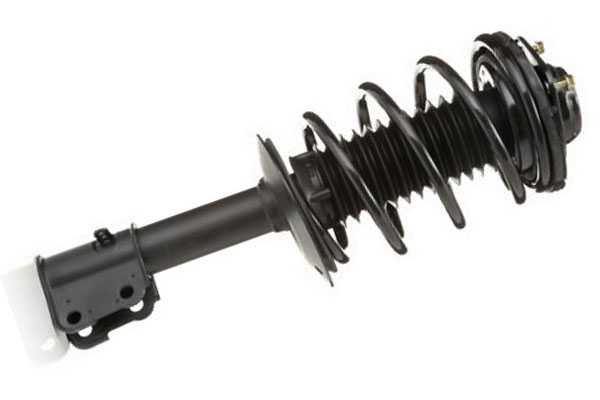 Another common dampening structure is the strut. Basically it's a shock absorber mounted inside a coil spring.

If you’re interested in finding the difference between shocks and struts, you can click on our another review called Shocks vs Struts. Check it out

In case you wanna know more about it, here you have it. Struts provide two jobs, dampening function like the shock absorbers and structural support for the vehicles suspension. They do a bit more than shock absorbers, which don't support vehicle weight, they only control the speed at which the weight is transferred in a car, not the weight itself.

The Mac Daddy of struts is the MacPherson strut invented by Earl S. MacPherson. No one knows what the S stands for except for Wikipedia, which says it stands for steel, probably.

The MacPherson strut consists of a single control arm in a strut assembly which allows tire and wheel to move upward and downward. It's design allows for a reduction in a number of parts, lowering unsprung mass, as well a smooth driving comfort. These are pretty small, not too complicated, and not too expensive, so they're pretty common. They don't take up much space horizontally, so they're super common in front suspensions on the front wheel drive vehicles. They do take up a lot of space vertically, though. 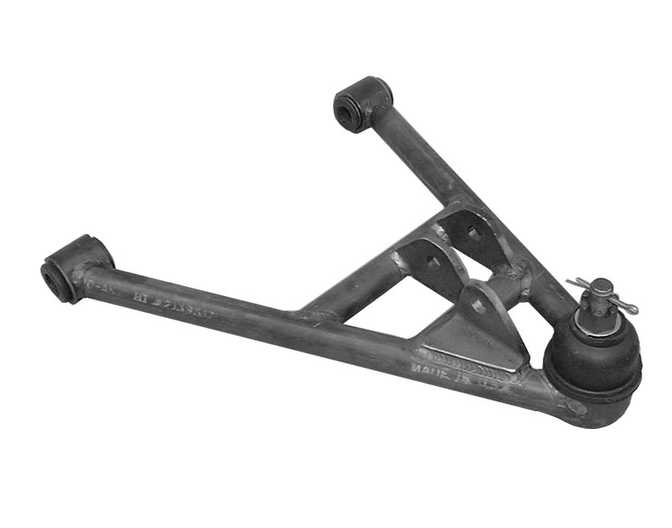 Another common side front independent suspension, the double wishbone suspension or an A-arm, doesn't take up as much space vertically, but it's a horizontal hog. Well there are several different possible configurations. This design typically uses two wishbones shape arms to balance the wheel.

Each wishbone, which has two mounting positions to the frame and one at the wheel, has a shock absorber and a coil spring to absorb vibrations. Double wishbone suspension is allowed for more control over the camber angle of the wheel which describes the degree to which the wheel tilts in and out.

They also help to minimize roll and sway, and they provide for a more consistent steering field. That's why double wishbone suspension so common on the front wheels of larger cars.

We have already sorted out this question - What is suspension? But what about rear suspension mechanisms? These are usually a little simpler `cause you don't need to integrate the steering.

The shock absorbers attached at the clamp that holds the spring of the axle. You can have the same basic design with coil springs but in this case, the spring and shock absorber can be mounted as a single unit or as separate components. When they're separate, the springs can be much smaller, which reduces the amount of space that the suspension takes up.

For independent rear suspensions, if both the front and back suspensions are independent, then all the wheels are mounted and sprung individually, resulting in what some ads call four-wheel independent suspension.

Any suspension that can be used in the front of the car can be used on the rear and versions of the front independent systems described in the previous section can be found on the rear axles. Of course, the rear of the car, the steering rack, the assembly that keeps everything together and lets you turn, well, it's not there, so that means rear independent suspensions can be simplified versions are the front ones, but the basic principles are the same.